All year 3 and 4 boys will be involved.

There are seven teams playing in a round robin festival across three pitches. All matches will be 8 minutes one way. Please note this is a festival and there will be no presentations.

After the rainfall earlier in the week we managed to catch a break ahead of our very own festival, held on the bottom pitches. The enthusiasm around the park was a pleasure to behold and all of the boys thoroughly enjoyed the day despite the cold that came towards the end of the festival. The boys played 6 games of rugby and played each one with as much intensity and determination as the next. Thank you to all of the boys, visiting schools, coaches and parents for coming along and making the day what it was. To all of our boys, very well done for your efforts throughout the day 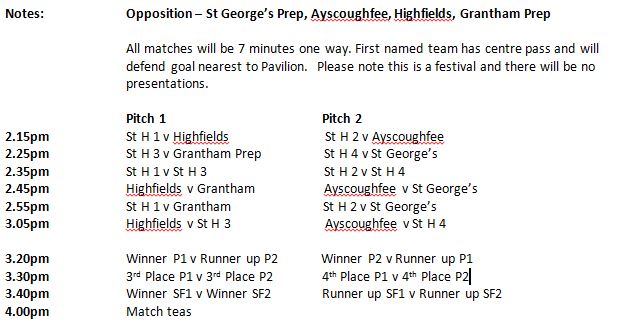 St Hugh's U9 Hockey and Tag Rugby Festival saw over one hundred pupils playing in a friendly festival on Wednesday afternoon. Every Year 3 and 4 pupil from St Hugh's represented the school and it great to welcome children from Highfields, Grantham Prep, Ayscoughfee Hall, St George's and Greenwich House.

The hockey festival was made up of two groups of four teams which played in a round robin format, with each team playing one and other in 7 minute games. The second part of the afternoon allowed schools to meet new opposition depending on where they finished in the group stage.  All players were coached throughout the games, making it a great learning experience for all involved.

With a large U9 cohort, St Hugh's were able to field four 6 a side teams.  The afternoon began with some of our Year 4 players meeting and greeting our visitors on arrival, while the remainder led their own team warm ups in preparation for the games ahead. It was lovely to have Amelia (Year 8) assisting our games staff throughout the festival.

Right from the start, St Hugh's demonstrated a very good awareness of the game; they got themselves on side and were able to put themselves into an appropriate formation.  I was also pleased to see our girls reacting to the whistle and responding to the umpire's signal quicky; something we have been encouraging more recently in training.

Many thanks to Mr Wilson who served over one hundred hot dogs by the pavilion which were certainly well received! A great end to a fantastic afternoon of sport.

Independent Schools of the Year Awards

We are delighted to have been shortlisted in two categories!

Independent Schools of the Year Awards

We are delighted to have been shortlisted in two categories!

What a wonderful term we all had!

A wonderful day was had on Mr & Mrs Scott's farm learning about the importance of farming.